Tomas Petkus, former J/105 Fleet Captain and long-time skipper of Vytis (#104),  has been elected to the Lake Michigan Sailing Hall Of Fame, it was announced Friday.

The formal induction ceremony will take place later in the 2021 sailing season.  The award honors individuals who are dedicated to the betterment of sail racing and leaders in the sport.  Petkus' Corinthian spirit as Fleet Captain was evident by his willingness to provide access to his and his crew's technical expertise including rig settings, sail handling and other racing tips for new members of the Fleet.  A tradition that continues to be emulated among the J/105s decades later.

Petkus, along with his brother "Gyt" successfully skippered Vytis to snag the CYCRTM Mackinac Cup as the overall winners in the 2007 Chicago - Mackinac Race.  Petkus and the tightly knit crew (many family relatives) has consistently won honors throughout a storied racing career on Lake Michigan.  They have twice won the Chicago NOODs overall (2009 and 2019).  Here's what Tomas had to say after the first win as reported in US Sailing:

"This is huge for us.  This is a regatta we've always aspired to win, and we come to the NOOD every year."

By every year, he meant every year for the past 18. The 2009 NOODs was his 15th in the J/105 class.  The Vytis guys sail their boat like a professional crew, but they'd never let you mistake them as such.

"We're a family boat,"  says Petkus.  "For us, it's more important to have fun with family and friends than to win."

In addition to his racing prowess, Petkus served in a number of administrative capacities.  He was the Appeals Committee Chair of LMSRF Appeals Committee and was part of the Legal Committee for US Sailing.  He was Fleet Captain of the J/105 Fleet Five and served as its Treasurer for more than a decade (2002-2013).  An unfortunate spinal condition forced him to permanently retire from sailing about six years ago, but his love for the sport remains.  Petkus graduated from the University of Illinois and Chicago-Kent College of Law.  He was admitted to the Illinois bar in 1980 and .  He still practices law at the firm of Tobin & Munoz.  His parents emigrated to the US from Lithuania (after Stalin invaded the country in 1953) when Tomas was just one year old. 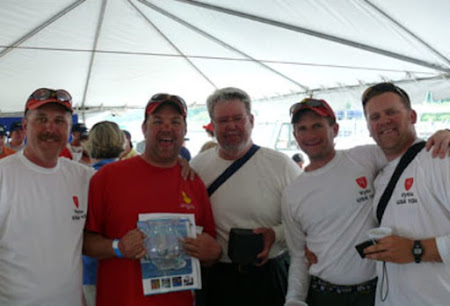 Tomas Petkus stands in the middle of his Vytis crew moments after winning the overall 2009 NOOD regatta in Chicago, IL:

This a draft of the J105 Fleet 5 2021 schedule (pick link below). The plan is to return to the normal regatta's and our historical racing series. However, this is perhaps dependent upon where things are with Covid 19, vaccines, & herd immunity. It is unlikely there will be large social events. Especially, at the start of the season.

As of now they are planning to do the GLIOR again.

Please note that CASRA and the Clubs are still working together to finalize, so there may be some changes.

The Queen's Cup, the Third Coast Cup Long Distance race to North Point, & do we want to do Sheldon Clark or join in the MORF Open that weekend need to be considered.  As are LD vs. Buoy races for some of the weekend regattas.  Do we want to organize Training Regatta's? All food for thought. Your comments and any suggestions are always welcomed.

We will have a couple Zoom calls to catch & see how everyone is doing.. A separate evite will be sent out to all. We will update if any changes come about and vote to finalize the schedule at the Spring Meeting.

It looks like we will have several new boats joining us this summer!

I would say wish for warm weather, but I know several people still have ski trips to come. 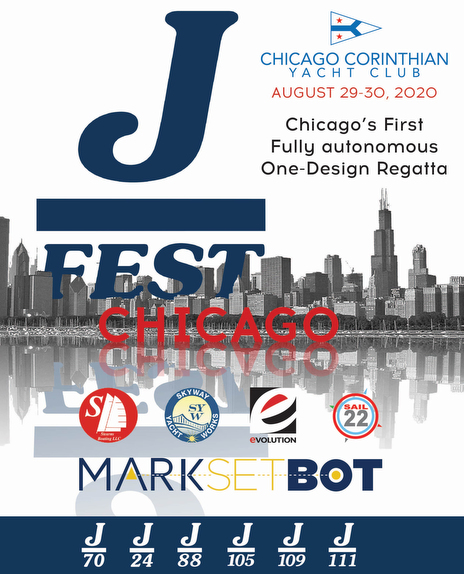 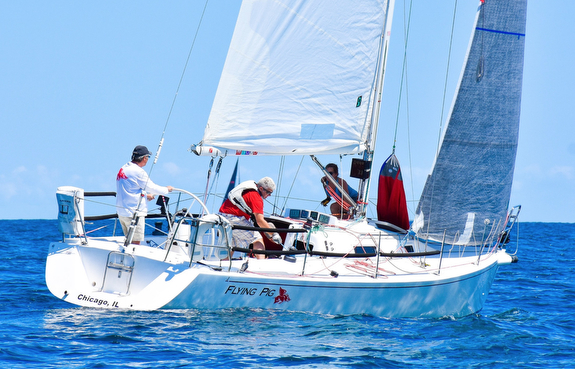 Great Sailing @ Chicago Yacht Club Verve Cup
(Chicago, IL)- One of the largest course-racing regattas in North America, the Verve Cup is an annual world-class sailing event attracting many national and international competitors. Both the 3-day Offshore Regatta and, later, the 2-day Inshore Regatta host well over 100 yachts off the beautiful Chicago lakefront and skyline.

For this year's edition of the Verve Cup Offshore Regatta, it featured three J/One-design fleets (J/88, J/105, & J/109) along with ORR and PHRF Handicap fleets.  Overall, J/Crews had strong performances in all classes, with just about every one of them enjoying an eight-race series!

The six-boat J/105 class saw a runaway winner in their class. Breaking out their can of Popeye's spinach was Jon Weglarz's THE ASYLUM. The inmates were on fire! Starting out graciously with a 3rd, they scorched the race track with five 1sts and a 2nd, closing again graciously with a 3rd in the last race for a total of 13 pts. Getting schooled were two teams that are accustomed to being at the top of the leaderboard, Clark Pellet's SEALARK and Mike Sheppard's FLYING PIG. In the end, both teams had good races, taking 1sts, 2nds, 3rds, but not enough to overcome the inmates dominating performance. SEALARK took the silver while FLYING PIG took the bronze.

New CASRA Series, see their website for NOR, SI, & other details. All participants need to observe Social Distancing or wear Masks & observe all local health requirements.

It has been a long winter, to help get everyone up to speed, improve the whole Fleet’s competitive skills, and try out the latest in tracking & remote buoy technology we plan a series of races were each boat will be recorded with on the water filming and a group debrief afterwards.

For those seeking the highest level of competition, this series of Colors and Verve Cup will demand boat speed, handling and tactics over several days of intense buoy racing.  These are Class A1 events.  No pros are allowed.  The series will be scored by the low point system with no throw outs.

This series is a great way to get into One Design buoy racing or just sharpen your team’s skills throughout the summer.  These will be Class C1 races so you can bring a sailing professional, sailmaker, or coach.  Just remember the class weight rules apply and your pro will count toward that limit. However, for this series if the crew weight will be exceed; the pro can stay on the center line and will not count towards the crew's weight. The series is scored with the high point scoring system and no throw outs.
Vin Chicago - Distance Series

Fluky winds and big shifts are a major part of sailing on Lake Michigan. However, with great boat speed, some navigation skills, and a little bit luck these challenging port-to-port races are a lot of fun.  Plus, there's always a great party at the finish.  These races will be Class C3 events so you can bring a sailing pro, sailmaker, or coach.  The series is scored with the high point scoring system and new this year with one throw out. In case of a tie, finish position in the last race will be used to determine winner.

In recognition of the growing desire for shorthanded racing CASRA has worked with a number of Clubs to offer dedicated sections in several regattas. The J105 with its asymmetric spinnaker is the perfect shorthanded boat. We have several boats that regularly participate in the Solo Mac and other such events. Here is your chance to get out there and test yourself and support some great causes.

Tomas Petkus, former J/105 Fleet Captain and long-time skipper of Vytis (#104),  has been elected to the  Lake Michigan Sailing Hall Of Fa... 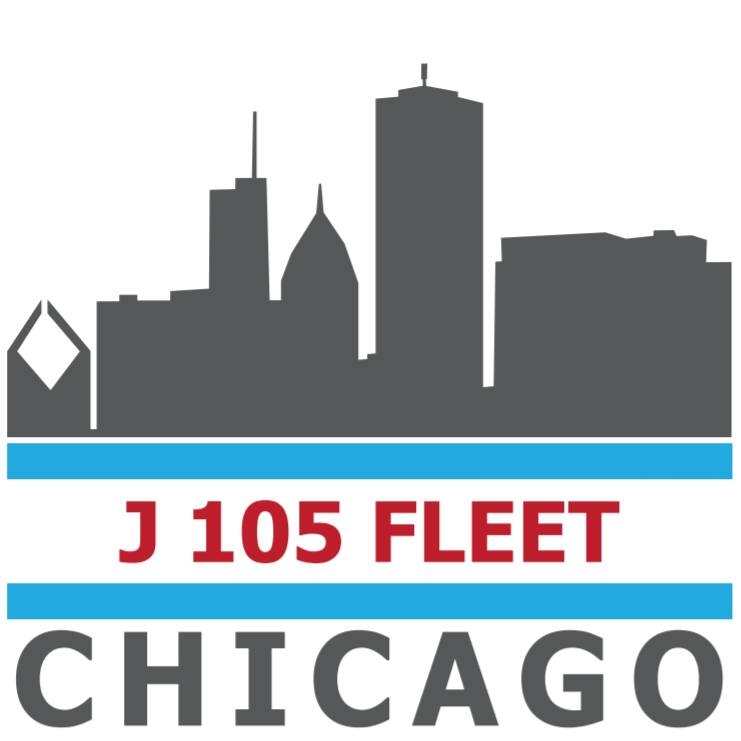